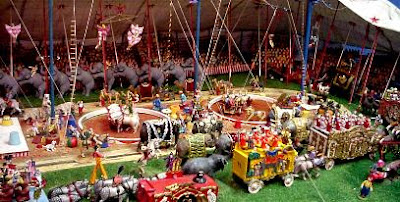 I miss the "Knife and Gun Club." (That's what we called the ER on a Saturday night -- and what ERs around the world are called at that time.) Or, to put it another way, I hate blunt trauma, at least the kind with lots of force involved. Give me a nice penetrating injury: I can handle it myself (with the necessary cast of partners in crime.) Bring in someone hit by a car, a jumper, or -- as seemed to happen in San Francisco with more regularity than one would predict -- someone run over by a city bus, and the scene devolves into a circus with many more than three rings, everyone (except us general surgeons) wearing blinders while deliberately focusing on as tiny a part of the squashed victim as possible. It's messy in every way. And, in private practice, it's much more common than those pleasant little knifings and shootings of the trauma center.

In big city ERs, it's an oft-heard aphorism: "Trauma happens to people who are asking for it." There are exceptions, of course; often, heart-breaking ones. If there weren't, the corollary age-old adage wouldn't exist: "Survival of trauma is inversely related to the victim's value to society." But in the typical trauma, the initial experience is heavily influenced by the nature of the victim: often belligerent, drunk, drug-addled, interfering with those trying to help. In that spirit, I offer a blip from my book, a favorite story from back then...

"...Yet compassion itself can become a victim after getting spit at, sworn at, lunged at by the people we were trying to help. I watched in admiration as a bearded (and therefore compassionate) family practice intern struggled to hold still the head of a gunshot victim who was thrashing and swearing, resisting despite his severe wound. The man managed to twist his head around and bite the thumb of the intern, whose immediate response was to shout, “YOU BIT ME!” and pull his hand back into a fist, ready to strike. But showing amazing control and taking a deep breath, he stepped away and walked into the hall, where I saw him pace up and down, talking to himself. Finally, after a minute or two of deep reflection and meditative self-analysis, he strode back to the head of the stretcher and looked down at the guy, thoughtful and calm. And popped him one in the nose."
With the air around them fouled by the stink of vomit, unsubtly seasoned with alcohol and rotting potato chips, drunk drivers are hard for me. Blubbering some times, producing an effluent of insults at the next, they remind me how dangerous they are to us all, and I have a hard time generating sympathy. May as well have snipers shooting at us from every overpass: that's how I see the fact that I share the road with these people. But I do what I need to do. I've always wondered if video-recording the scene and gifting the victim with a copy would help with their drinking problems. See yourself naked and struggling, blood in your hair, snot all over your face, vomit in your pubes, someone shoving a tube into your nose, your dick, while you snork incomprehensibly, flopping like a fish on a dock. Given all that, the simpler the trauma problem, the better I like it.

Trauma is digital: mostly yes-no decisions, needing to be made rapidly. The downside is its disruptiveness of my schedule or my sleep; the upside is that once I'm there in the ER, it's about running through a pretty-well-ingrained decision tree, and getting the hell to the OR. Penetrating trauma, anyway. Victims of blunt trauma may end up in the ICU, with or without some other specialist having pinned this or trephanated that, with me -- scalpel still sheathed -- getting calls from the unit all night and into the next days. (There's a seemingly unalterable dictum: multiple trauma is the charge of the general surgeon, whether or not there's an operable condition for her or him. I get it. I don't always like it.)

If a person hates drama, hates adrenalin, s/he shouldn't be a surgeon; especially a trauma surgeon. Drama surgeon. Having trained in a trauma center, I not uncommonly was part of getting a victim to the OR within ten minutes of arrival in the ER, tubed, IVd, catheterized. When it was serious enough, I'd step into gown and gloves wearing whatever I'd been wearing, no wash, no shave of the patient. Splashed around a little iodine, thrown on some drapes, and got to cutting, while a couple of people squeezed in blood and the anesthesiologist administered only oxygen and paralyzing agent, until we were caught up; if we ever got there.

"We're comin' in code three, two minutes out." The red phone would give us enough warning to head to the trauma room, open the instrument packs, bleed the IV fluid down to the end of the tubing, assign tasks. You: N/G tube. You: ankle cut-down if we need one. You: foley. Swinging doors, like a saloon but without the clinky piano and the dancing girls, burst open to reveal a gurney attended by EMTs and cops. (If there were music, it'd stop at that point; heads would turn.) OK, no one's doing CPR. That's a good sign. Look for movement as the scene comes into focus. Thrashing, whatever else it may be, is a sign of life. Already intubated (tube in airway)? Well, it's serious, but at least that part is out of the way.

Ah, another one for my "Sid Files."

i once posted that i love a good gunshot wound as much as the next guy (more if truth be told), for the same reason. only my problem. no orthopods or head crackers etc. i handle it all. er (or casualties as we call it) is truly one of my favorite places. every day when i go to work i enter through casualties instead of the main entrance to remind myself of my roots. i'm thinking about posting on the philosophy of working on the type of people you're referring to in your post. up until very recently they were all i saw (almost) in casualties. sort of miss them. today i saw a gunshot wound of a guy who was really the innocent bystander and not just claiming to be. so much to say.

Oh Sid, You're a surgeon after my own heart. You sure know how to woo a Trauma Junkie

who handles multiple trauma depends on the country. in the UK, it's ortho. in Aus, it's general surgery.

hey Sid; at Wisconsin trauma, we had a saying:
"sterility is a state of mind"

Dr. Schwab,
I really appreciate your blog because it gives me a glimpse into what was happening around me during my traumas...thank you. My good friend told me once that more bus vs. people accidents happened in San Francisco than any other place she has lived. Is that because there's so many hills around that people leap before they take a good look, or is it because there's a lot of substance abuse there? My car vs. bus was mechanical failure (car died), so I think it could really be classified as an "accident." At least that helps the PTSD.

Good gracious, have you ever had 62 comments on a post before???