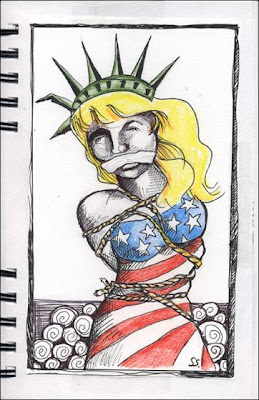 
OK, this is going to be a little political, but it's related to surgery, and to me personally, if vaguely.

A recent Surgeon General of the US, David Satcher, was a classmate of mine in medical school. And the most recent one is a surgeon like me. In fact, he trained where I trained. Them's my bona fides.

I find the following outrageous, and as far as I'm concerned everyone but the most blindly partisan ought to share the feeling:

"Anything that doesn't fit into the political appointees' ideological, theological or political agenda is ignored, marginalized or simply buried," Dr. Richard Carmona, who served as the nation's top doctor from 2002 until 2006, told a House of Representatives committee.

"The problem with this approach is that in public health, as in a democracy, there is nothing worse than ignoring science, or marginalizing the voice of science for reasons driven by changing political winds. The job of surgeon general is to be the doctor of the nation, not the doctor of a political party," Carmona added.

Carmona said Bush administration political appointees censored his speeches and kept him from talking out publicly about certain issues, including the science on embryonic stem cell research, contraceptives and his misgivings about the administration's embrace of "abstinence-only" sex education.

I don't know Carmona personally, but from what I do know, I doubt he's some liberal. Yes, I realize that he's appointed by the president, and, as we've heard ad nauseum, serves "at his pleasure." But dammit, there are some areas in which reality -- not to mention the common good -- ought to trump politics, ideology, and theology. People argue, and I don't disagree, that science isn't the same as policy; that scientists aren't the ones setting political agenda. Fair enough. But when science is simply ignored, redacted, or debased, then we are all the worse off. Our future is at stake in many areas. The facts ought to be on the table, unvarnished (I mean the facts, not the table. I don't care much about the table.) When decisions are being made only by a bunch of narrow-minded ideologues, we're in big trouble. They are. We are.

[Update: this is from the red states' favorite newspaper, the NYT:

"The administration, Dr. Carmona said, would not allow him to speak or issue reports about stem cells, emergency contraception, sex education, or prison, mental and global health issues. Top officials delayed for years and tried to “water down” a landmark report on secondhand smoke, he said. Released last year, the report concluded that even brief exposure to cigarette smoke could cause immediate harm.

Dr. Carmona said he was ordered to mention President Bush three times on every page of his speeches. He also said he was asked to make speeches to support Republican political candidates and to attend political briefings.

And administration officials even discouraged him from attending the Special Olympics because, he said, of that charitable organization’s longtime ties to a “prominent family” that he refused to name.

“I was specifically told by a senior person, ‘Why would you want to help those people?’ ” Dr. Carmona said.

The Special Olympics is one of the nation’s premier charitable organizations to benefit disabled people, and the Kennedys have long been deeply involved in it."

I am from Arkansas, so my first thought was like Scapel--Jocelyn Elders. I remember her from the lectures she gave to us in medical school. I really thought she got a bum rap.

After W is out of office, I think we'll have a flurry of revelations about overt and covert policies within his administration, probably a whole spate of books written about various aspects.

It's very telling when you have a former Surgeon General making these kinds of comments while his former boss is still President, very telling indeed.

Is anyone surprised? Gen. Shinseki got canned the minute he went off the reservation prior to the invasion and expressed concerns that more troops would be needed, that the post-war reconstruction would be problematic given the limited expeditionary force planned. This administration is a thinly veiled Fascist regime. Staying on message trumps everything else. Dissent is not tolerated. And the incurious, morally strident, intellectually deficient W still has a year and a half to embroil us in some Iranian travesty.

This post reminded me of some of the stuff I've read over at the blog of another surgeon--Orac of Respectful Insolence. He, too, would likely find W.'s distaste for science and reality more than a bit troubling. And I always thought Dr. Elders had more sense than these "abstinence only" fools we've got now. Yes, sometimes she was a bit too graphic (I was a teen or thereabouts when she was Surgeon General), but it beats the pants off of trying to completely ignore that teens are sexual beings by their very biology.

"W" is too worried about his war and his precious religious ideology to do anything sensible to help our kids or our health care system. JMHO.

"beats the pants off.." Amusing, in the context of Dr Elders....

When Carmona testified, so did Dave Satcher and C.E. Koop. They acknowledged that there's always been politics involved in the position, but they said that under the current rulers it has far surpassed anything previously seen. The argument that you can find examples in previous administrations of what this one is doing does not change the fact that these guys have taken it to a level never before seen: and the surgeon general (I think we could get along fine without one) is by far the least of it! Plus, at least Dr Elders got to say what she wanted to say: evidently there weren't people issuing prior restraint. She said stuff, it wasn't liked. Carmona was shut up before he could open his mouth.

And, of course, it was the same people who gagged Carmona in advance who were eventually able to get Elders shut down.

This administration has placed "political officers" in many key positions to oversee policy; remember that kid at NASA who had falsified his college credentials and was censoring global warming science? This is more than vaguely reminiscent of the soviet style political officer, and when the democrats get control back, they better eliminate this whole structure and not just replace those players...

Mitch: I agree. And whereas I think it's pretty clear that this president has done more harm to the institutions of our country than any other, I'm not very optimistic that there's any Democrat with the gumption to do much about it. Which makes me worry that the damage may actually not be fixable.

Carmona is just another casualty of this administration who seriously owes the evangelical Right. (I won't go off on Bush, because 1) I don't have enough space and time, and 2) that walking protoplasmic disaster speaks for itself.) I do agree that the SG *is* a political position--the very term "Nation's Doctor" has that component built-in--but to be actively censored is unconscionable. It's not even "Is this guided by science?"--the discussion was never able to take place!

As far as Elders is concerned, she was awesome. But, as the representative for the nation as a whole, I do think she did herself a disservice by refusing to be diplomatic. The nation simply was (and is) not ready for a Black woman in a position of authority to be advocating things that were that far away from what was socially normative, regardless of how obviously true it was.

Personally, my favorite SG was Antonia Novello. She spoke at our school this year, and gave a powerful presentation on women and AIDS WRT world health. I can't say enough good things about her, not to mention the fact that she's directly responsible for my eventually getting a domestic MD in the State of NY by continuing funding/support of 5th Pathway for those schools that meet their accreditation.

And he is an employee of the government. He should not allow _his_ politics to interfere in his job.

It is something to consider that a public employee takes a whine because he is not allowed free reign to air his political views under the penumbra of his office. -- And then goes ad hominem in the response to his behavior.

Care is needed in interpreting these cases, especially when they get close, as in an acquaintance or a closely held ideological position.

anon: If you are arguing that what happened to Carmona was the prevention of him speaking his political views, the mind reels. It's as much the opposite of that as it could be. One problem with the current administration is that it considers its political views/beliefs to take precedence over facts; especially -- but hardly limited to -- scientific/medical ones. It politicizes everything. A supporting argument for them, if anything, must aver that politics trumps everything; perhaps that's a fair argument. But I'm of the mind that we could do with a bit more reason, on both sides of the aisle.

And: it's hardly "ad hominem" to state factually the restraints under which he was ordered to operate. It's like Harry Truman said. "I don't give 'em hell. I just tell the truth, and they think it's hell." For many in the current administration -- and their supporters -- facts are a hell of a problem.

Interesting post. I left a lengthy post put have put it over to my word program for now.

You want an example going back years?

Hepatitis C. We are all at risk as surgeons.

Troops are coming home from Iraq with strains never before seen in the USA. Heard this at Brooks Army in San Antonio.

Someone has been watching and documenting. Check out the blog at www.hcop.org. (Not an pharma "astroturf org") A bona fide frassroots advocacy org. They presented by invitation to the NIH Consensus Conference on this.

Anyway, an excellent read, and the links are incredibly revealing.

Oh, this is something I will have to come back to later. This situation is truly disturbing but I want to think what I say through so you and your readers won't think I am walking around in my tin foil hat again!

Yeah, well, I'll put Carmona up there with all the other folks in the "that would have been nice to know three or four YEARS AGO" category.