My last post seems to have sunk without a ripple, so I'm letting my mind coast for a day or two. Letting neurons fire randomly and record the blips. Downhill sledding. Clutch in, no effort. Empty the mind, see what rises...Here's a couple of memories that popped up, for no particular reason that I can palpate, using the least amount of effort possible:

Training in San Francisco meant seeing a broad swath of humanity. I once operated on an ancient Chinese woman who spoke no English, and who'd been subjected in her distant youth to the practice of foot-binding. Entirely unrelated to the problem that led to my surgery, it was nevertheless memorable enough that the image is fresh in my mind, sticking amongst the otherwise decaying RNA. Her feet were a lot like this: 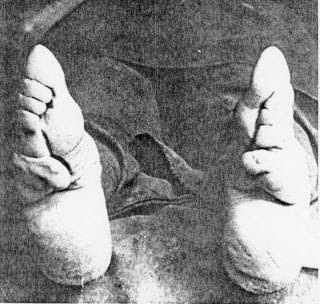 It hurts to think about it. Here's how the Xray would, no doubt, have looked: 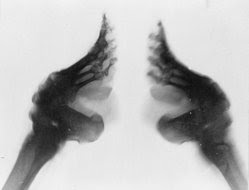 The mind now ping-pongs to the arrival of another Chinese person, this one a male, looking to be at least a hundred years old, and not planning to get any older. He'd been ministered to for a few days by traditional healers of some sort, including having the stigmata of "cupping." What I remember most was the rigidity of his abdomen: "board-like abdomen" is a classic sign of severe peritonitis, the muscles involuntarily tightening up in a protective response. I've seen a few, but this was the only one ever that was truly like a plank. With enough of them, you could have walked across the Golden Gate without a bridge. I was working in the ER at the time, and as I sent him to the floor, I wrote the presumptive diagnosis on the ER sheet: "Perforated viscus; rule out death..."

Boink. Another cerebral pinball hits a bumper. When Chief Resident, I cared for a man locally described as "The King of the Gypsies." Whatever he was, he came with an extensive and colorful entourage who literally camped outside the ICU for the several days he was there. Many families of other patients were understandably disturbed; still, it was a unique and in many ways irresistibly enjoyable group. They cooked, they played music, they set up little tents, all inside the hospital. For some reason, security let them stay (maybe the King had an army.) The women were beautiful, the men a little scary; but they attended to my every word as I updated them daily on the man's progress. He made it. And when they left late one night, they took several chairs and a TV with them. 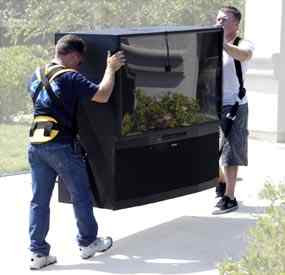 And speaking of TV, I was making rounds as a horny intern during the baseball playoffs. Attending more to the bandages of my patient than the televised proceedings, I slowly became aware of a female voice singing the National Anthem. Clear and crystalline, straight up like a perfect martini, this was the purest version ever; the Platonic ideal. No quavering, no self-centered arrangement. The real deal. Stunning. I looked up to see a dark-haired beauty (I married a dark-haired beauty not long after), clad in short shorts and a LA Dodgers jacket. "Who the fuck is that?" I uttered (not easy to do, with the lower jaw non-participatory), zoned far away from the work at hand. And it was then that I became a life-long fan of Linda Ronstadt. 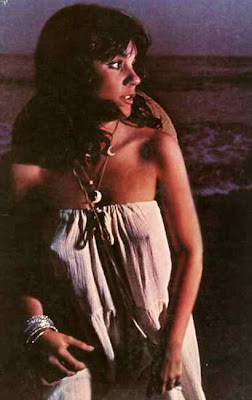 When I was a gen surg resident at OVMC, I took care of one of the Dali Lamas of the Hari Krishna group there in West Virginia. Women were not suspose to touch him, but I was the resident on call. One of his followers had hit him over the head, subdural hematoma (GS residents covered all the surgical specialties there). I had to cut his "pony tail" off (I was teased about being cursed due to defyling the high priest.). We did the surgery with another priest chanting in the corner of the OR. He did survive, but I lost track of him when he went to rehab.

i really enjoyed this post. thanks for the laugh. well you probably know my opinion of so called traditional healers (or as i call them, traditional killers), so many of my posts are dedicated to them.

rlbates, i remember a doc i worked with. a good swazi man who unseremoniously cut off the strands around a patient's waist which were meant to keep evil spirits away. he reasoned that seeing as though the guy got so f##ed up in a car accident (also indirectly caused by spirits like jack daniels and johnnie walker) it was clear the tassles were not working anyway.

another funny story. the thorax guys do a valve on a jehova witness. as luck would have it he bleeds postoperatively. they take him back. i happened to walk in (i just did some trivial thing next door) as the consultant joins the fray. the anaesthetist consultant also just arrived and started the blood. the junior nark (anaesthetist) pointed out to the senior nark that they shouldn't have given blood. the senior panics, turns to the thorax consultant and shares her concerns. the thorax guy says; "not my problem. yours. besides you have already dammed his soul to hell so you might as well give the rest of the blood."

rl and bongi: great stories! Maybe I'll dredge up some more and keep posting little lists once in a while. You both should, too. I think in the end, bongi could out-amaze us all!!

Great stories, one and all. It's great fun to see the humanity and humor of docs mainly because I don't think people realize docs acutally have a sense of humor.

Sid, did you pose for that first picture?

Hi, great stories and an insight into some of the strange happenings that you have encountered. Keep em coming!

lynn, i call it as i have seen it. many many times. although i often doubt the accuracy of the word traditional.

Screw the X-rays and the bone shakers, didn't y'all see that photo of Linda Ronstadt?!!? Damn, y'all are blind...