There's a recent post by Orac about the "'swag" given to docs by drug companies at medical meetings. It reminds me that when I was in med school, my class was -- far as I know -- the first ever to refuse the personalized black bags traditionally given to students by Eli Lilly Company. I was of two minds.

My consciousness was a little late in the raising. It hadn't yet occurred to me back then that there were issues with taking goodies from those guys. We were also in the midst of the Vietnam war, and my class was active in protests. I attended a meeting in which a moratorium on classes was being planned, for the purpose of war protest, and the dean -- a bullet-headed guy much admired by all -- burst in and, in his most gravelly of the graveliest of voices said "What we need is a moratorium on bullshit." So it was a transitional time; but things were beginning to dawn on me. (By graduation, I was one of only a few wearing a "peace-sign" armbands at the ceremony. Ironically, I'm pretty sure the only member of my class to serve in Vietnam was me. And I'm glad I did.)

I'm proud to say that when I went into practice I was -- until there evolved a like-minded clinic-wide policy -- one of the very few in a large clinic to refuse to see drug reps; nor did I -- despite the attraction of great restaurants and a the occasional gratuity -- attend dog and pony shows put on in the name of some new drug or another. (Truth: I went to one, and felt dirty.) But back then, I wanted the damn bag.
"Right on," I said, gritted teeth hidden behind a powerless pasted smile, signing on to the class-wide refusal. Fuck The Man. But I wanted the damn bag. I'd worked hard; med school was a goal sought and achieved, getting the MD sheepskin in one hand and a black bag engraved with "Sidney Schwab, MD" in the other was something I'd envisioned for a long time. Screw activism. Gimme the bag. In the end, of course, I didn't take it. There was always my grandmother... 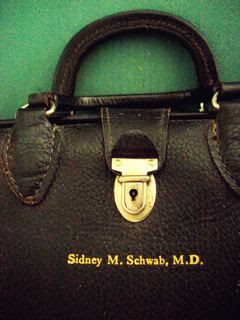 During my internship there was a company hawking a very long IV catheter, to be inserted in the arm (a theoretically safer route than some others) and threaded far, to where it could be used to measure central venous pressure, or to provide high-calorie intravenous feedings. Today such tubes are routine, and work well. Then, there were problems with the first iterations: inflamed veins were nearly universal. At our weekly conferences, complications were regularly reported. But the rep.... the rep.... She was a beauty. We were (excepting the one female in my group) a bunch of overworked and underpleasured guys. Her blond hair, her sweet smell. Her lovely form, those welcoming, eager br.... (Sorry. My wife reads these posts...) Suffice it to say that whatever the latest problem, she had a way of sidling up and explaining it away and talking us into using the catheter again. And again. And oh yes, oh yesss, again. Standards? Yeah, I have 'em. But don't we all have a price?...
Posted by Sid Schwab at 7:42 AM

I'm so not a phan of big pharma. Phorgetting phor the moment that my mom is alive thanks to their phabulous products, I often wonder how their executives sleep nights.

But I'm curious. In 1971, what would have been the biggest, baddest-ass, most expensive product that Lilly was pitching?

My guess is some of the antibiotics like vancomycin wouldn't have been cheap, but overall, it seemed like Lilly was concentrated in antibiotics, anesthetics/analgesics (wasn't Ketalar theirs?), endocrine stuff (first company to market insulin,) and psychoactives (that were really a revolution in treating mental illness).

What could they have been doing that was unconscionable? Compared to the price today of their antipsychotics ($600/month at some doses), their questionably-useful sepsis treatment ($2000/day?) and their downright deception in marketing antidepressants, I can't imagine what provoked such outrage in 1971.

eric: plumbing the dim depths of memory, I don't think it was a specific act of revolt against Eli per se; rather a statement of planned independence from all forms of inappropriate influence. I'll admit that a couple of years earlier, while driving across the US from the west coast to Cleveland/med school, I saw an Eli Lilly plant of some sort in Iowa or Indiana or some place. Hungry and semi-broke, I stopped, thinking as a med student I might get a sandwich in exchange for some sort of tour. Turns out it was an agricultural plant. To test the effects of residua, they fed fertilized grass to cows, and then, through a gigantic stoma made into the stomach (size of a mason jar, screw-lid and all) dipped a full-size soup ladle to sample the ruminations... I remain impressed to this day.

Well, now there are two things I shouldn't read before lunch; _Prepared Foods Engineering_, a magazine intended for the people who put the "new zestier flavor" on junk food, and comments by a general surgeon.

Sadly, Lilly got out of the agribusiness a few years back by forming a joint venture between their Elanco and Dow . . . I'd totally pay good money to see a giant access port in a cow. They live on as Dow AgroScience, still based in Indianapolis.

I take it the cow didn't seem to mind?

Eric, Flashing On The Rabbits With Mascara in Bloom County

Dr. Schwab that is such a terrible pun that I laughed whole-heartedly

We're all whores, just answering to different pimps, is all. The "solo flyers" don't last on the street and mysteriously disappear...

These are some of the commandments as laid down by that great icon of American cinema, "Superfly."

There is a great chapter in "Surely you must be joking, Mr Feynman" about attempted 'inappropriate influence'.
It's a shame medical doctors don't employ the Feynman technique.