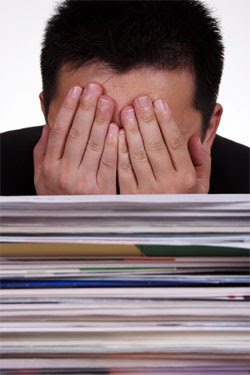 (Here's another of the posts I wrote a while back, and didn't publish, in my "why bother" phase.)

Once again (it seems this keeps being reported, about annually) we have a report which states that doctors (especially surgeons) are doing a poor job of informing women about reconstruction options after mastectomy. I'm at a loss; I simply don't know what to make of it. My mind is filled with conflicting thoughts.

The first thing that comes to mind is a question: is it true? And: if so, how can it be? And: if it's not true, what's up with the report? And the ones before it. And before those.

I've written about what a complicated and difficult mission it is properly to explain breast cancer treatment to patients. And it's not just because the subject is complicated, with many components to treatment and options within those components; it's also that such a discussion takes place in the context of a mind near to or beyond blowing, enwrapped and nearly erased by fear and shock. There's only so much that can be absorbed.

There are two corollaries: one is that there's a tendency to compress the info, especially during the first encounter. The other is that -- and I know it well, having witnessed it time and again -- even the most careful discussions can be misunderstood, partially forgotten, or misconstrued in the horror chamber that is that initial consultation. Which is why I wrote a booklet recapitulating the information I shared, and personally handed it to each of my breast cancer patients. Even then -- and this really bugged me, because I prided myself in my commitment and ability to explain things to my patients -- I'd get the rare call from a pre-op nurse saying my patient hadn't signed the permit because she said I never explained things to her.

So what I'm saying is this: before swallowing the data without chewing, I'd think there's some number of people who actually did get informed but who zoned it out. Far be it from me to defend surgeons. I know the category includes many who are jerks, who can't be bothered to do much more than cut and run. But to the extent that the data are true -- and I question it -- it may not be entirely layable at the feet of the cutters. And it may also be the case that some surgeons practice in an environment where most of the counseling and decision-making is done with primary docs or oncologists, wherein the patient shows up at the surgeon's door with mind already made up. Or polluted. I absolutely rejected that style; in fact, I agitated to get involved as early as possible. But other approaches are not always unreasonable.

Without doubt surgeons could, as a group, do a much better job of talking to patients. But when someone says he or she was never told this or that, it ain't necessarily so. And when it is, shame on us.
Posted by Sid Schwab at 6:00 PM

On a related note:
Dear Surgeons,
Please stop trying to tell me important information immediately after I wake up post-op. It is comforting, but I will not remember a THING.
Thankyou.

I am just curious if you have ever seen the movie "The Doctor" starring William Hurt. He is an oncologist who contracts cancer, and is suprised at how he is treated by his fellow surgeons once he becomes a patient. I am not sure as to whether it was based on a true story, but it changed his approach..

anonymous: I wrote about that here some time ago...

mike: I did see it. In fact, it was based on a true story written by a doc I sort of knew, if I'm correct.

My surgeon was unbelievably awesome. At my appointment to confirm the results of my biopsy, she said, "All you're going to hear me say today is that you have cancer. I'm happy to answer any questions, but really I want you to just go home and scream and cry--do what you have to do. Then come back on Monday ready to fight. We'll talk about details then."

Now THAT's the way to handle it.

I had a great surgeon, but I like the approach sharkey's doc. had. I was told everything all at once. He was very thorough and explained to me if I chose mastectomy, that a 2nd surgical team would come in to do the reconstruction, if I wanted it done right then. There was so much to take in, your head is spinning. Love the idea of the pamphlet! You would have something later to go back over. It is just so much to absorb.

Now you know how I feel about surveys that purport to show what a lousy job we primaries are doing counseling patients to stop smoking. The studies are all retrospective, asking patients what the doctor said.

"Why no; he never said to stop smoking. Of course if he said to, I would."

by total chance i just posted on this very topic. the zone out is a fact.

The failure to obtain informed consent is the commonest failing of the profession. In all my years as a medical risk manager, I have never encountered a physician who actually obtained informed consent for anything. The risks of the planned procedure are not explained, nor are the alternative methods explored.

I do not imagine that this next point applied to Dr. Schwab, but the saddest of all is the fact that interviewed about the prequelae to the procedure, every physician simply lies about what they told the pt before getting the sign-off. It's especially daunting because most carriers and rrgroups will defend informed consent cases through verdict and appeal, even though it's an ethical morass.

I recognize that the pts get it wrong. But I do not, I am trained to log what was exchanged between doctor and pt, and I have never heard a physician have the talk that would actually satisfy the legal standard for informed consent. It's usually "sign this or you're gonna die." When my mom was the pt, it went poorly, since I chimed back with "she's gonna die anyway. What alternatives to endarterectomy are there for a woman whose health is this fragile?" We ended up with an extra-anatomical graft (axillary-femoral), and though I was aware of the risks and listened attentively for the doctor to talk about the need to take coumadin daily X the rest of her life, there was not a mention of it.

As luck would have it, 2 years post surgery Mom developed a stercoral perforation and bled out internally in appx. 20 minutes. Did not bother with a wrongful death lawsuit, since Mom's qol was around 5% pre-surgery, but it still galled me that the team never did get informed consent to the procedure, and that remains the norm.

Gee, if all physicians wing it, maybe it's not malpractice; but it still ain't right.

anonymous: it sounds like there have seen some bad examples in your experience. On the other hand, I think your statements that doctors all lie or say "sign this or die" are very, very far from the norm. It's not, however, a black and white issue, as I wrote here. And as you may know, in your field, there have been issues raised when doctors do too good a job of listing dangers, leading to a patient refusing needed care. In any case, I'd have to suggest you must surely work in a place that has, for some reason, attracted the dregs of our profession.

And PS.. dont just tell family members, and assume they will pass it down to the patient. I went into a a surgical biospy thinking i would know the answer when I woke up or in less then a week.. evidently they told my family it would be at least 2 weeks.. and no one told me! very stressful.

I understand the zoning out as a pt. I did that last year when faced with a surgery I didn't want and I was really scared because of risks. As a matter of fact you helped me greatly Sid because of what I learned through your writing. I ended up not needing the surgery. Hooray!

You know...I love how sacred you view being given the trust to cut open a patient and work inside them. It is a big deal. I don't understand how some surgeons just cut and run. Is it their personalities or the way they were trained...told not to feel or get involved?