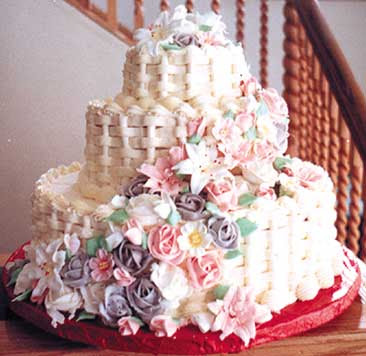 The body comes in layers. I've written here and at least one other venue about the need for surgeons to find the planes between those layers, and to work within them. Having used the technique to prolong a few lives over the years, I can now say I've done it to prolong my own.

My wife is the oldest of nine siblings, all of whom live within (amplified) shouting distance of Puget Sound; and their parents do, too. Family gatherings are frequent, and for special occasions (which occur only once or twice a week) the entire clan collects at my in-laws' place, the northernmost homestead, nestled dramatically at the water's edge (of a lake, not the Sound). This weekend, the raison d'etre is their mother's eightieth birthday. Hilarity, lubricated and well-fed, will undoubtedly ensue. A damper has been narrowly avoided.

It was delegated to me to pick up the special-ordered cake, produced in a fabled Danish bakery in Seattle; and I did. I'll accept only part of the blame: the guy who handed me the cake, and the extra goodies I free-lanced, did so with the after-mentioned goodies piled on the cake-box. His fault. But I failed to compute the danger. My wife, when I got home, looked stricken as she surveyed the stack, and the tell-tale stains on the boxtop when I removed the bags. Frail flimsy frosting flowers, flattened. F-f-f-fuck.

Ready to drive the twenty-five miles back to the bakery to convince them that their shared blame should occasion the re-frosting of the flowers, I figured I should at least attempt a cure. So, taking a nice little knife in hand, I tried to discern the now-distorted layers of faux petals, using my most well-learned control to turn the blade within the flowers, recreating a sense of the smashed strata of pinks and blues and yellows.

It turned out OK. Not, I admit, perfect. But judged acceptable by my wife. As I've said about surgery, second go-arounds are rarely as good as something done well the first time. Even when working in layers.
Posted by Sid Schwab at 3:12 PM

If that's the actual cake, then you did a great job put it back!!! Have a great time!

Have a wonderful time!

Nope, that ain't the actual cake...

nice. i wish i could do that.

Hats off to you - and blessings on your continued marriage!

It would have been really fun to have pre and post-op images for this procedure! I bet you're really handy to have around Thanksgiving. :)

There is a certain aspect of medicine that we might categorize as "Screwing things up then fixing them." This can, in fact be a recursive sort of thing, and when a number of physicians are involved can be something like a group singing "Row, row, row your boat...".

Just thinking outside the (cake) box.

Greg: well, no one ever said practicing medicine would be a cake walk... Getting a good result, under some circumstances, is the frosting on the cake.

Sid,
That's just asking to have your cake and eat it also. ;)

Dammit, Sid, where were your talents the day I picked up my mom's b-day cake? It was one of the photo cakes. Looked great when I picked it up. After I had to slam on the brakes because a woman decided she liked my lane better than her own, my mom's lovely visage was sporting a mustache. Seems that the black icing from her blouse scooted up to her face, defying the forces of gravity. We just nicknamed her Zorro and had a great time. Wish we'd had your delicate touch, though. Great story!

I have made those cakes. Those flowers --you have to have a certain type of icing and then it has to be mixed to a perfect consistency, everything needs to be a certain temp the heat of your hand can change everything, you start with an icing base on a flower nail then each petal is built around it using special tubes, it takes a lot of practice and some people never get it, then everything is frozen before you can assemble anything on the cake. Once it thaws you can't touch it at all.

I would not have believed you could save anything with a knife. Your a better man then I am Gunga Din.